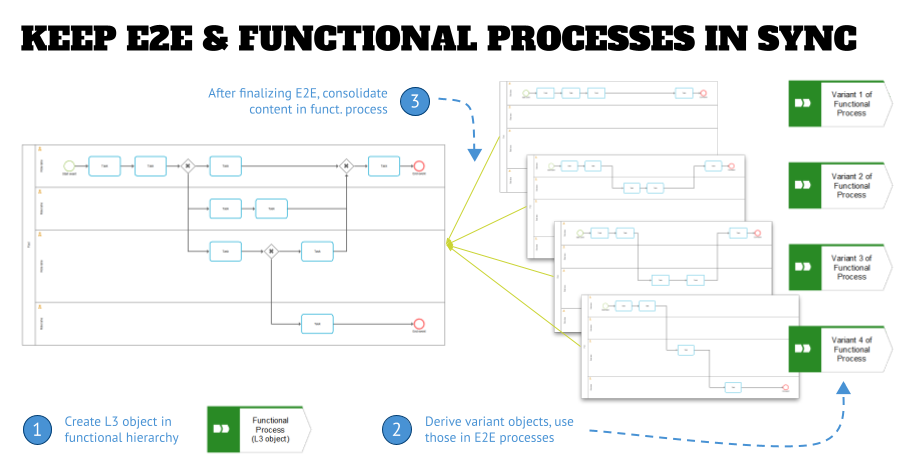 A second process view that most clients build is the End-to-End view. These are processes that are assembled by processes from the functional decomposition (ideally variants of it, but we’ll discuss this later). These are typically easily identifiable because they follow a “From/To” naming structure like “Order to Cash”, “Procure to Pay”, or “Hire to Fire”. They are also defined by the start and end events, which are the bookmarks of the process, and typically these also can be used to define what is *not* included in the E2E process.

In addition to the start/end events one of the first things you typically look at when defining an E2E is what the outcome of the process is, and how you can measure the success of it (using Key Performance Indicators mapped to processes and assigned KPI models that decompose those).

The main use case for E2Es are system implementations or other transformation projects, and process improvement i nitiatives. Typically you see E2Es created in the Solution Design phase of the process/solution lifecycle.

To create an E2E a bit of imagination is needed, and the first question is where to start and where to end. When making this decision, having a clear charter is helpful for obvious reasons – may it be the implementation of a new software (“let’s update our SAP Finance module, it’ll be fun” – has nobody ever said), or an organizational change.
In both cases the E2E is describing the process part of a capability and you should also check with your capability map which capabilities/capability areas you are tackling with this process.

How to create an E2E process?

Creating an E2E process is a process in itself that includes not only your project team, but ideally other stakeholders and process owners as well. It also might be triggered by the needs of your project, so the PMO might be able to deliver information about the “why” and how the project is aligned to the company’s strategy.

How do I manage my ever growing E2Es?

Now that we have created an E2E model with its assigned lower-level processes, we are still not completely done. In larger projects you easily run into the situation that you have defined your E2Es too narrow or too wide, or you realize that other E2Es also cover a process that is part of your E2E.

For that reason a coordination is needed. Have a look at the graphic below that shows three E2Es that are related to each other.

However, the only way to really manage all E2E processes is to plan their development in releases, and have a predictable schedule that not only avoids that someone misses that they should participate in conversations and decisions, but it also allows to communicate what is “up and coming” to your end users/viewers.

How do I keep both views in sync?

As indicated above, it is crucial that you do not see the E2E view as a standalone process view. It is tied to the functional process view, and is reusing the objects on the lower level, and managing dependencies and variations by using variants on the value-chain level.

The graphic below shows the activities in a release as overview:

In my experience the coordination effort for the releases is minimal in the bigger scheme of things and well worth spending the time for coordination.

What are the benefits of E2E processes?

There are multiple benefits of having End-to-End process models:

But what about risks?

I have to admit that I worked in projects that were mostly driven by Governance, Risk & Controls (GRC) folks. Even though they can be a powerful ally – think about the amount of fines an organization has to pay if they are not in compliance, which can help making the business case for implementing a process management capability easy – but they also have a different “view of the world”. It is driven by looking not at how an organization performs, or how it can improve its processes, but with the lens of risk identification, avoidance, and mitigation.

This can lead to the prime focus of managing the risk inventory and aligning them to processes, independent on which level that process exists, or if they are even related in a way that makes sense for the business. They also might add processes because certain apps or data are used in them that are related to the same class of risks.
In the end, it might create a picture as shown in the graphic below, that does neither fit into the functional decomposition, nor into the E2E structure … both views visualizing and structuring how the business “works”.

In the project mentioned above, it even went so far that we created a “risk-oriented process view” that stood on its own, and combined processes based on risk-related criteria. One example was a high-level process of “Account creation”, which was on the one hand side not very specific, and on the other hand it did not distinguish that the creation of an account for a credit card might be something completely different than creating an account for a mortgage (or an IT account for online banking).
Needless to say that the org units who were not involved in standing up that initial structure, but were supposed to add their processes to it as “fast followers”, could not work with it because they didn’t recognize themselves in this structure. This brought the project close to a failure after the successful initial push of appeasing the GRC requirements.

But how do you treat the legitimate demands of the GRC folks in all three Lines of Defense (operational risk management, the risk system, and internal audit) then?

My suggestion is to treat this topic not as a separate view, but to make it a reporting exercise that will provide the necessary reports and dashboards for the GRC stakeholders. This can be done by tagging the steps where risks occur and then model which controls mitigate these risk and how they will be tested (and who does the management of risks, controls, and tests). This structure, including the attributes of risks and controls, such as type, frequency of testing, etc., can then be sent to a GRC tool which then can automatically create audit plans and other things that are needed to manage the GRC requirements.

An architecture tool should also support the creation/import of existing catalogs for higher–level laws and regulations, regulatory obligations and requirements, policies, risks, controls, etc. so that business users who create process models can pick from a list and don’t have to create their own objects that then would need to be reconciled “after the fact” by admins and GRC folks.

The tool should furthermore support this with scripts that help “pushing” higher-level risks to lower-level steps and to created the relationships between tasks and controls (and thereby reducing the amount of manual work). Other useful features would be predefined workflows, scheduled reports, and dashboards for the GRC stakeholders.

In general I would expect the risks and controls to show up in the functional view, and recommend to handle the development in the same ways as described above when we were talking about how to keep both process views in sync: If you have risk and controls already identified in your functional processes then you are good. However, you should invite GRC folks to your E2E process development sessions, and model their input as well, so that when it comes to the third sync step above, the new relationships between tasks and risks will make their way into the functional process view for future analysis and auditing.

Both process views go hand-in-hand with each other when it comes to defining and describing your business processes. Having just one of those is not sufficient when you set up a full architecture in your tool. They will also help when it comes to coordination with the risk folks in your organization, which can be – depending on your relationship with them – your biggest friend or foe 🙂

Roland Woldt is a well-rounded executive with 25+ years of Business Transformation consulting and software development/system implementation experience, in addition to leadership positions within the German Armed Forces (11 years).
He has worked as Team Lead, Engagement/Program Manager, and Enterprise/Solution Architect for many projects. Within these projects, he was responsible for the full project life cycle, from shaping a solution and selling it, to setting up a methodological approach through design, implementation, and testing, up to the rollout of solutions.
In addition to this, Roland has managed consulting offerings during their lifecycle from the definition, delivery to update, and had revenue responsibility for them.

Roland Woldt is a well-rounded executive with 25+ years of Business Transformation consulting and software development/system implementation experience, in addition to leadership positions within the German Armed Forces (11 years). He has worked as Team Lead, Engagement/Program Manager, and Enterprise/Solution Architect for many projects. Within these projects, he was responsible for the full project life cycle, from shaping a solution and selling it, to setting up a methodological approach through design, implementation, and testing, up to the rollout of solutions. In addition to this, Roland has managed consulting offerings during their lifecycle from the definition, delivery to update, and had revenue responsibility for them. Roland is the VP of Global Consulting at iGrafx, and has worked as the Head of Software AG's Global Process Mining CoE, as Director in KPMG’s Advisory, and had other leadership positions at Software AG/IDS Scheer and Accenture. Before that, he served as an active-duty and reserve officer in the German Armed Forces.