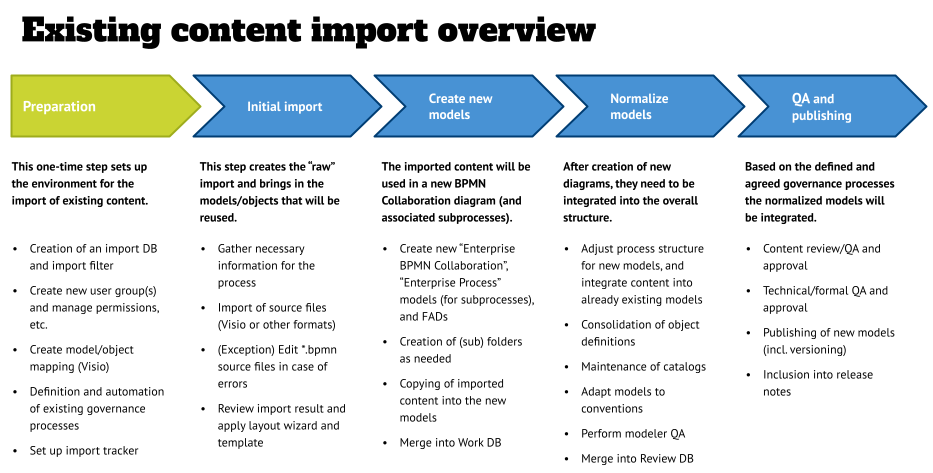 Import of existing content (part 1) – a blessing or recipe for chaos?

One major point of the implementation of an architecture tool is the import of existing content. Organizations have years and sometimes decades of content in various formats available, that might be in various statuses – from “current” to “horribly incorrect”, “cannot be found anymore”, or “outdated”.

However, it might be a worthwhile exercise to get your new program started by bringing in content that your users and stakeholders already know. This will not only add meaningful content and might act as an accelerator for future projects, but also creates trust in your new repository when users interact with it for the first time.

In this article I will walk you through an approach that has been proven to be successful in multiple import projects that included dozens and hundreds of models and other input documents. In the “how-to / import content” part I will focus on the import of models (in Visio, *.bpmn, ArchiMate, or other formats).

This is part 1 of a 2-part series, which will be continued in the next blog post.

Importing content is straightforward, but also a process with a lot of moving parts in the air. Therefore, it is important to not lose track of where each individual model is in its journey.

The graphic below shows the process in an overview, and it assumes that you already have a database structure in place that includes a hierarchy of items. In this article I am using the import of process models (BPMN models to be more precise) as an example, and show steps aligned to the architecture tool that I am using – ARIS. Depending on your chosen tool, some of the steps might be slightly different.

Please also note, that I am only covering the import of existing models, not the import from Excel, a database, or another source system using the tools’ APIs. The steps are similar, but it would take significant more details to explain those, and would “muddy the waters” of the “import an existing model” use case.

The process is comprised or five steps:

The first exercise is to create a catalog of to-be imported content. Ideally you do this in a database that will be the “source of truth” through the complete import project, and also supports the estimation of efforts that will help with prioritization of the import sequence, or determine which models will be imported and which ones not (we are big fans of Notion over here are What’s Your Baseline, so you might want to have a look at this tool).

When creating this overview, I recommend to involve as many people as you can – stakeholders, business unit leaders, project managers, architects, and start with a loose collection of ideas and content. This shall be oriented on the goals of your organization (and yours, as defined in the Strategy phase of your implementation), and the objective is to get a rough overview of “what is out there” and what the volume of this content is.
Your stakeholders can be used as multiplicators/communicators and can open doors to people in your organization that you had no idea that they existed, or that they have worked on projects that are relevant for your effort.

Once you’ve created a rough overview, align the models to your priorities and initiatives, and determine an initial prioritization and sequence for import. Discuss this initial version with your stakeholders and get an agreement on which content shall be imported first.

From what I’ve seen in the past, everything that is regulations/SOX-related is a good candidate, as well as existing taxonomies in the various architecture views (not only in processes, even though the examples in this article will focus on process models).

After you have created the initial overview it is time to discover the details of your to-be-imported content. This includes descriptions, complexity, source file format, hierarchy level, (process) area, owner, (modeler) contact, assigned modeler (importer), and the planned import batch.

Especially the complexity will be important to estimate the effort. My recommendation is to keep this simple and just count the number of objects that need to be imported, and then come up with a simple rule that defines low/medium/high complexity (20/50/50+ is a good start). Also keep in mind that the source file might include multiple models (tabs in Visios for example), and that those are counted as individual models.

The next step is to set up your database structure and create an import filter. As shown in the graphic below, you want a separate (logical) database to do the initial/”raw” import of the source files. In many cases these include content that you do not want to have in your governed DB setup (in the gray box below), and you also might need elevated permissions or a special method filter for the import that is different than the standard filter you are using in your day-to-day work.

An example for this might be that you are using the “Enterprise” BPMN model types for your regular modeling, because you want to take advantage of the ability to use dedicated org/role/app lanes in your collaboration diagrams. When importing *.bpmn files from another system these are not known in the technical file format (because the specification does not specify these, but is rather “foggy” in describing what lanes are). Therefore ARIS will import all *.bpmn files as standard BPMN Process Diagrams. The lanes in those won’t be reused in the later “create new models” step and therefore should not go into the Work DB where the normalization happens.

Once you have merged the content into the Work DB -before the normalization step (see part 2 of this series)- the models in the Import DB can be discarded. A good practice is to have a “clean” Import DB before the next batch of models is ready for import.

Next, you might have to create a mapping if the source files require it (Visio for example). This step is not required for every source file type (e.g. BPMN, ArchiMate, DMN) because they have a technical format defined, and tool vendors take this and create out-of-the-box imports for these formats.

In case of Visio, you would have to map the Visio stencil to a model type, map the shapes to object types, and map the attributes of the source shapes to model and object attributes. Obviously the more consistent things were created in Visio, the less effort is needed for the mapping – if things are all over the place, you might want to ask the question if the better way would be to use the Visios as an input for a manual creation, because the preparation of each import, and the cleanup after the initial input might be more than a manual recreation.

The last step in this phase is to determine and implement automation opportunities. Some architecture tools allow you to create workflows, or other automation means (scripts, macros, etc.) to trigger activities that can make things easier in the overall process. The obvious use case it the release cycle management shown in the gray box above, but there are also smaller automation opportunities, such as merging of content between database, triggering semantic checks, or locking/unlocking models if they reach a certain status in the import process.

In this phase the “raw” import will be done, and this is the step that you will see in the vendor demos when the topic of import comes up.

The steps in this phase are:

After you’ve imported the models, you might want to do additional “pixel pushing” to give the model a more user-friendly layout, and also correct immediate errors that might stick out. In the screenshot above, for example, all events were imported as either intermediate or end events, but no start events. Go through your model, and change the symbols of the event objects as needed (the graphic from the source file will help you determine this).

Up to this point we accomplished what the tool vendors show as “easy-peasy” content import, and their claims that the tools can import source content is correct.

In part 2 of this series, we will cover the next three steps – create new models, normalization, QA and publishing – that are needed once you have completed the “raw” import, and we’ll discuss the integration into a governance process.

Roland Woldt is a well-rounded executive with 25+ years of Business Transformation consulting and software development/system implementation experience, in addition to leadership positions within the German Armed Forces (11 years).
He has worked as Team Lead, Engagement/Program Manager, and Enterprise/Solution Architect for many projects. Within these projects, he was responsible for the full project life cycle, from shaping a solution and selling it, to setting up a methodological approach through design, implementation, and testing, up to the rollout of solutions.
In addition to this, Roland has managed consulting offerings during their lifecycle from the definition, delivery to update, and had revenue responsibility for them.

Roland Woldt is a well-rounded executive with 25+ years of Business Transformation consulting and software development/system implementation experience, in addition to leadership positions within the German Armed Forces (11 years). He has worked as Team Lead, Engagement/Program Manager, and Enterprise/Solution Architect for many projects. Within these projects, he was responsible for the full project life cycle, from shaping a solution and selling it, to setting up a methodological approach through design, implementation, and testing, up to the rollout of solutions. In addition to this, Roland has managed consulting offerings during their lifecycle from the definition, delivery to update, and had revenue responsibility for them. Roland is the VP of Global Consulting at iGrafx, and has worked as the Head of Software AG's Global Process Mining CoE, as Director in KPMG’s Advisory, and had other leadership positions at Software AG/IDS Scheer and Accenture. Before that, he served as an active-duty and reserve officer in the German Armed Forces.