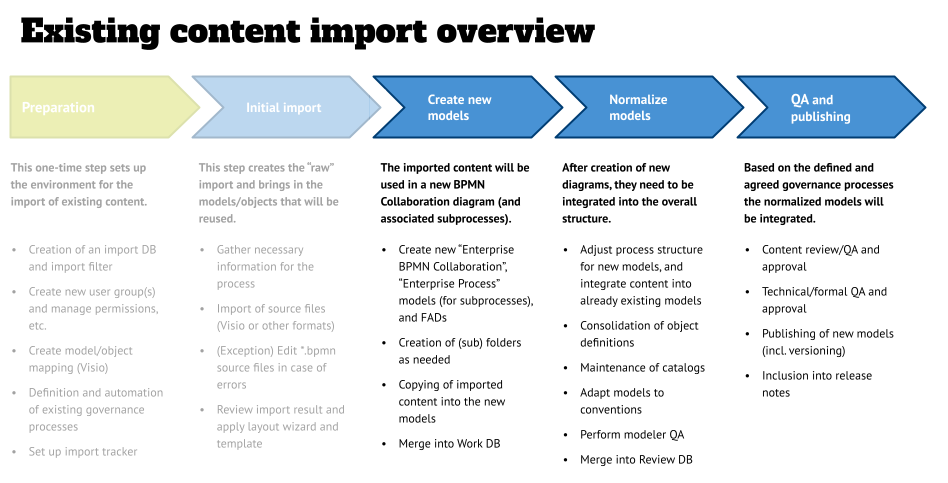 As mentioned in part 1 of this series, a model import as part of the implementation of an architecture tool can be a crucial success factor to get a new program off the ground and act as an accelerator for future projects.

We discussed the first two phases (preparation and initial import) and will have a look at final three phases:

This phase is most likely specific for our example here, because we are looking at BPMN process models and the limitations of the specification, which in some areas does a not-so-stellar job in specifying things (for example when it comes to the use of lanes).

Up to now we have worked in the “raw import” folder for your models in the Import DB. We have identified the main process that is captured in the *.bpmn file, and imported it – and all additional processes that might be included as subprocesses – as standard BPMN Process Diagrams.

This typically is not enough for a real-world BPMN project – the main process needs to be a BPMN Collaboration Diagram, and the subprocesses need to be BPMN Process Diagrams according to the specification. In addition to this, most clients want to have a semantic used for their lanes (roles, org units, apps, etc.) and for this different model types are used (“Enterprise BPMN Collaboration Diagram” and “Enterprise BPMN Process Diagram”).

The steps in this phase are:

After the merge is complete, the models in the Import DB are not relevant anymore and can be deleted to create a blank slate for the next batch of imports.

This phase drives the effort in a model import project – it will integrate the individual models into the existing structure/hierarchy of your Work database and is a mix of conversations, model adjustments, and admin tasks.

Before you begin to normalize your models, I suggest that you do an update from upstream systems (in case you have created interfaces to other “systems of truth” as part of your architecture tool implementation). This will ensure that you have the latest and greatest objects in your catalogs, and you don’t run into the situation that you see gaps, which might lead to delays if you have to contact the upstream system owners to ask for what the correct object will be – for example applications, or risks.

Typically, these updates are scheduled (e.g., once a week), but I recommend to ask for an extra update and wait for the notice from your admin that the import was successful.

After the update from upstream systems the steps in this phase are as follows:

The last phase of the model import contains the formal approval process and various merges, versioning and publishing.

The first step in this phase is the submission to QA review. Even though it sounds trivial, I suggest to automate this whole phase with a workflow engine that your architecture tool should have. This will take out the minutiae of locking/unlocking the model in the Work DB, check of mandatory attributes, capturing of timestamps for reporting, and merge of a submitted model into the Review DB, where stakeholders will do their reviews.
Another benefit of using a workflow engine is that stakeholders will be notified when their contribution is needed, and they will have a task list that they can work from (and either do the task, using a custom GUI, or delegate the task to someone else if needed). Lastly, the workflow engine can provide reports and dashboards that show where the individual models are in the workflow at any given time – a feature that project management will love.

Typically you see three types of review, and I recommend to do these in this sequence in the Review DB:

If any of these reviews fails, the process will be sent back to the modeler with a list if items for correction, and all technical steps in the workflow will be reversed (unlocking of model in Work DB, deletion of model in Review DB, notification of all people involved about rejection, etc.). The model then will be re-submitted after the corrections are done, and it needs to be defined in the workflow if all three review steps need to be done again, or if existing prior approvals are still valid and a later reviewer will be triggered.

In case of the successful approval, the fully approved model will be versioned, the model status being set to “released” and it will be merged into the Master DB for consumption by all viewers in the organization, as well into the Work DB, so that the next iteration of this model starts with the identical model that exists in the Master DB.

I recommend to define this as separate governance process and implement a separate workflow in your automation component of your architecture tool for this purpose. A detailed description of the certification process is out of scope for this article for that reason.

After going through all five phases of the model import process that were described in these two articles, you have successfully imported and integrated the new content, and also published it while getting approval from all stakeholders.

From now on the imported processes will follow the established governance, and the source files should be deleted, so that no new changes will be done to them – a tempting idea for some people who don’t like to “do the overhead” that might come with working in a central repository. I suggest that you discourage this practice and simply ignore if someone shows up with “their version” of an existing model … easier said, than done (depending on who that person is), but be assured that in the long run you will be better off to insist on the consistency of the repository.

A major takeaway of the process shown above is to keep track of all the moving parts when importing dozens or more models. A tool that is very good in managing this (and other things) is Notion. We are big fans of this tool for organizing and preparing our podcast, and it is affordable – free for personal use (one owner, and you can invite guests for edits) or working in a team.

In the very near future we will offer the tracker that I’ve used before in Notion as a product on Gumroad. If you made it to this point, you can apply the discount code Import15 for a 15% discount on the files and templates 🙂

The tracker will not only all phases of the import process (catalog, tracking each model through the defined process in Kanban boards, and reporting), but also includes additional information how to do this. It also includes a presentation with detailed step information and examples from a large import project.

Roland Woldt is a well-rounded executive with 20+ years of Business / Digital Transformation consulting and software development/system implementation experience, in addition to leadership positions within the German Armed Forces (11 years).

He has worked as a Team Lead, Engagement/Program Manager, and Enterprise/Solution Architect for many projects. Within these projects, he was responsible for the full project life cycle from shaping a solution and selling it, to setting up a methodological approach through design, implementation, and test, up to the rollout of solutions.

In addition to this Roland has managed consulting offerings during their lifecycle from the definition, delivery to update, and had revenue responsibility for them. This also included the stand-up and development of consulting teams, and their day-to-day management.

Roland Woldt is a well-rounded executive with 20+ years of Business / Digital Transformation consulting and software development/system implementation experience, in addition to leadership positions within the German Armed Forces (11 years). He has worked as a Team Lead, Engagement/Program Manager, and Enterprise/Solution Architect for many projects. Within these projects, he was responsible for the full project life cycle from shaping a solution and selling it, to setting up a methodological approach through design, implementation, and test, up to the rollout of solutions. In addition to this Roland has managed consulting offerings during their lifecycle from the definition, delivery to update, and had revenue responsibility for them. This also included the stand-up and development of consulting teams, and their day-to-day management.