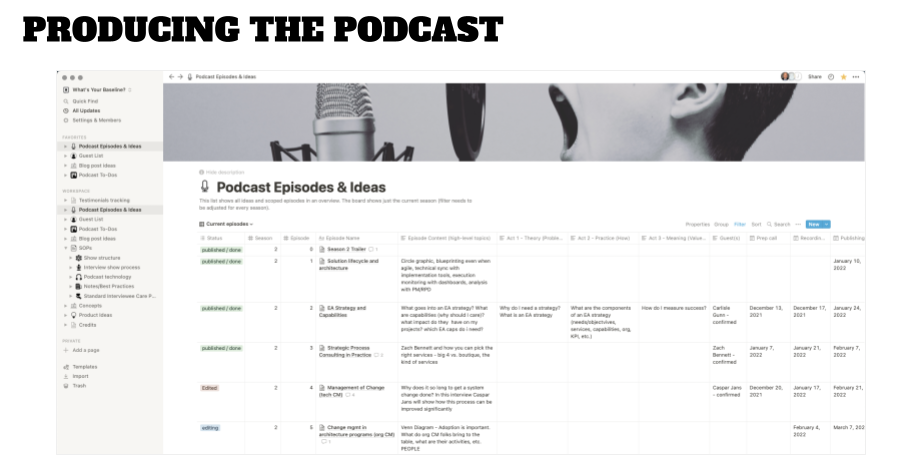 Producing the What’s Your Baseline Podcast

Some people have asked about a behind-the-scenes look at how we are producing the What’s Your Baseline Podcast, and I thought it would be a good idea to show you how things work behind the “magic curtain”.

Being architecture and process professionals, we obviously follow a process, and this article will show you the details of it.

We are big fans of Notion (www.notion.so) here at What’s Your Baseline. This tool allows you to capture almost every type of information in a Wiki, in databases, Kanban boards, etc.

Therefore, we have two major lists that we will use for this step and going forward:

Then we reach out to potential guests via email or LinkedIn and have initial conversations with them about the topics and timeframes for prep meetings, recording dates, and publishing dates. We also discuss if the guest has marketing-related constraints that should be considered in the planning, such as marketing campaigns that feature the podcast.

And lastly, any source content (existing presentations or interesting articles) are saved on Google Drive for later use.

This step happens 6-8 weeks before the start of a new season (we have two seasons with 12 or 13 episodes from late July to the holidays in Dec, and from mid-January to June). The first step is a review of the process that we used in the previous season as a retrospective – what worked, which tools should we change, which marketing activities have been done, etc.

Then we map out the publishing dates – every two weeks on Monday morning – and look for major topics for the season. In the current season 2 we have three:

While doing this we determine if the show will be a “regular show” where J-M and I will talk about a topic or an interview show. The graphic below shows the structure of the two show types in an overview.

During this step we also create a rough outline of the shows following the structure in the episode database, so that we have something to look at when talking with a potential guest later.

We also record a trailer for the season at that point in time which will be published a few days/weeks before the first episode will be available. The trailer keeps the audience engaged (because it shows up in the RSS feed/podcasting apps) and will be used for promotion as well (on LinkedIn and YouTube).

2-4 weeks before the planned recording date, we have a Google Meet meeting with the guest and discuss the following topics:

This meeting takes about 30 minutes and immediately after it the invites for the meetings will be sent, so that the times are locked in everybody’s calendar.

About a week before the recording (and sometimes combined with the previous meeting), we have another Google Meet in which we look at if changes have happened / are needed going forward (esp. dates). We will do a test recording using the audio recording software (Soundtrap for regular shows and Zencastr for interviews).

In this session J-M geeks out about microphone gain, the highs and lows of the audio waves, and so on. Once he gives his OK, we are ready for the recording.

We also have a last look at the show page in Notion to make sure that the outline is OK, or if some things need to be added to the list.

For this meeting, we typically schedule two hours to have enough time to record an hour/1.5 hours of content that will be edited down to the 45-60 minute show length later.

We start this with a Google Meet and then switch to the recording tool. Once everyone is settled in the recording tool, we start talking, while J-M is taking notes for SNAFUs and other mishaps that shall be edited out later. Every participant has the Notion page open and typically it will be edited in real-time, depending on how things go (e.g., moving things around, or deleting content if we have covered it earlier in the show).

This page, and a stopwatch (TinyStopwatch is a good tool for this if you use a Mac or Windows PC) are helpful to manage the flow and structure of the show, so that each segment is roughly the same length.

During this session we let the recording run in case of mishaps (who is losing his train of thought?) and re-dos of questions and answers. We also take breaks between the segments to discuss if there are changes for the next segment to be made.

After the recording we thank the guests and discuss the next steps that they are involved briefly.

Since we record episodes not in the sequence that they will be published (we try to “bundle” some episodes and the schedules don’t always allow a recording date close to the planned publishing date), and also want to have a backlog of ready-to-be-published episodes in case that thing called “life” comes in, we switch the episode DB to a Kanban view to have an overview of the status and easy update of where we are.

On the audio side, the show now goes to J-M’s experienced hands and he is doing the hard work of making us sound good. Without going too much into detail, you should have a look at the tool that allows you to edit multiple tracks (one for each voice and then the music clips or the pre-recorded intro) and effects for audio manipulation. He also uses some of the non-show recordings for the outtakes that we start each show with and adds all “standard” parts to the episode.

After that, a first edit will be posted on Google Drive for review, and the guest and I will have the opportunity to call out things that should be changed in the second edit.

During the review, we also create the quote graphics (in Google Slides) and small audio snippets as separate files, that will be used for promotion later. The audio MP3s will be converted into MP4 movies and then everything is saved on Google Drive.

A few days before publishing the final edits will be done in Soundtrap to produce the final audio file version. While doing this, a transcript will be created automatically using the built-in feature and saved in a Google Doc.

This file will then be edited (well, the AI is not *that* good), and used for the content area of the show notes, as well as in full for the last section of the show notes (see example here).

Lastly, everything will be stored on Google Drive. We also provide all resources (quotes, audio snippets, etc.) to the guests if they want, so that they can use them for their promotion and marketing efforts.

A few days before publishing day, the final edit will be uploaded to our podcast host, Anchor, and also converted into an MP4 video. The latter will be uploaded to YouTube. This also includes the meta data and descriptions and the scheduling of the episode. It will be available on the scheduled time on Anchor and YouTube, but might take some time to be available in the other podcast apps, such as Apple Podcasts or Spotify – you might want to keep this in mind, especially when you start your own podcast… the first submission might take days until everything is approved. Once everything is set up, your shows should be available within 30-60 minutes after publishing time.

The last thing to do is to create the show notes as blog posts here on the website. By now all content pieces (bio, photo, episode content, music credits, transcript, quote/title graphic) are available and it is just busy work to create and schedule the blog post.
The last step is to create a “pretty link” in WordPress, so that the show notes are easy to find – e.g., whatsyourbaseline.com/episode 16 redirects to https://www.whatsyourbaseline.com/episode-16-managing-change, which is the “real” post address, set in the SEO plugin.

Once the episode is published I typically do an announcement on LinkedIn and follow up with additional posts a few days later over the next two weeks (until a sneak preview of the next episode will be posted the Friday before it will be published).
For this I post as What’s Your Baseline, and then share the post from my personal account. J-M typically follows up with his own re-share as well, so that all three networks (the followers of What’s Your Baseline and our two personal networks) will see the announcements in their feeds.

On a regular basis (OK, typically daily, but at least weekly ;-)) I also check how the episode downloads and website statistics look and see if there is more promotion needed than usual.

This also gives some input on topics – together with feedback from listeners/readers via hello@whatsyourbaseline.com – for future episodes and articles. And the circles begins again 🙂

Roland Woldt is a well-rounded executive with 25+ years of Business Transformation consulting and software development/system implementation experience, in addition to leadership positions within the German Armed Forces (11 years).

He has worked as Team Lead, Engagement/Program Manager, and Enterprise/Solution Architect for many projects. Within these projects, he was responsible for the full project life cycle, from shaping a solution and selling it, to setting up a methodological approach through design, implementation, and testing, up to the rollout of solutions.
In addition to this, Roland has managed consulting offerings during their lifecycle from the definition, delivery to update, and had revenue responsibility for them.

Roland Woldt is a well-rounded executive with 25+ years of Business Transformation consulting and software development/system implementation experience, in addition to leadership positions within the German Armed Forces (11 years).

He has worked as Team Lead, Engagement/Program Manager, and Enterprise/Solution Architect for many projects. Within these projects, he was responsible for the full project life cycle, from shaping a solution and selling it, to setting up a methodological approach through design, implementation, and testing, up to the rollout of solutions. In addition to this, Roland has managed consulting offerings during their lifecycle from the definition, delivery to update, and had revenue responsibility for them. Roland is the VP of Global Consulting at iGrafx, and has worked as the Head of Software AG's Global Process Mining CoE, as Director in KPMG’s Advisory, and had other leadership positions at Software AG/IDS Scheer and Accenture. Before that, he served as an active-duty and reserve officer in the German Armed Forces.
Visit Website